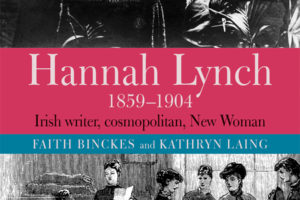 This is the first full-length critical study of author, critic, and translator Hannah Lynch. It explores her writing and her life, in doing so shedding new light on women’s cultural and political networks in Ireland and beyond. Never one to shy away from adventure or confrontation, Lynch travelled widely in body and in mind in the course of her relatively short life. She was born in Dublin in 1859 to a family whose nationalist affiliations shaped her early activism. She worked as London Secretary to the Ladies’ Land League in the early 1880s, and helped to publish and to circulate United Ireland when it was proscribed. A self-declared ‘vagabond’ and restless wanderer, she encountered diverse cultural communities in Dublin, London and continental Europe before finally settling in Paris, where she died in 1904. A ‘New Woman’ who frequently questioned that very category, she produced prose texts on the key issues of her time: feminism, imperialism, the state of modern literature, and Irish national identity. Whether she was promoting the Ladies’ Land League, mocking W. B. Yeats or passionately defending Alfred Dreyfus, her provocative persona placed her at the sharp edge of contemporary debates about the proper role of the woman writer. Likewise, her fiction is populated with powerful female characters—many of them Irish—struggling to forge their own paths to independence, self-expression, and personal fulfilment.