UCD Press has a number of new and forthcoming literary titles that you may be interested in, details of which are below. We are also offering a 20% discount on ALL OUR LITERARY TITLES for a limited time when purchased directly from www.ucdpress.ie. We hope that you find something of interest. 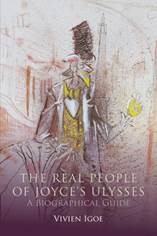 The Real People of Joyce’s Ulysses

It is well known that the pages of Joyce’s Ulysses are filled with hundreds of intriguing and quirky characters. What is less well known is that many of these characters were based on real people who inhabited Joyce’s Dublin and elsewhere. In The Real People of Joyce’s Ulysses, Dubliner and Joycean scholar Vivien Igoe leaves no stone unturned in revealing the biographies of scores of people that had previously been deemed to be fictional, and who had been accorded little attention as a result. Lavishly illustrated, the book provides a comprehensive A to Z of these real people with detailed information about where they lived, died and are buried; worked, intermingled and found inspiration. A number of characters appear under their own name and were celebrated Dublin personalities in different fields at the turn of the century, others were ordinary Dubliners. Numerous intriguing points of human interconnection also emerge, such as neighbours or street acquaintances of Joyce, or the many friends, enemies and contemporaries of his father. The newly discovered information in The Real People of Joyce’s Ulysses amplifies how Joyce manipulated and drew on a very intimate knowledge of Dublin and its inhabitants. It reveals personalities and a social history which would otherwise have been forgotten and provides a fascinating insight into the Dublin of Joyce’s time. 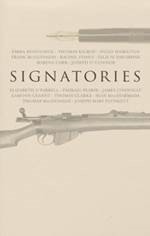 2016 marks the centenary of the Easter Rising, known as ‘the poets’ rebellion’, for among their leaders were university scholars of English, history and Irish. The ill-fated revolt lasted six days and ended ignominiously with the rebels rounded up and their leaders sentenced to death. The signatories of the Proclamation of the Irish Republic must have known that the Rising would be crushed, must have dreaded the carnage and death, must have foreseen that, if caught alive, they would themselves be executed. Between 3 and 12 May 1916, the seven signatories were among those executed by firing squad in Kilmainham Gaol. Now 100 years later, eight of Ireland’s finest writers remember these revolutionaries in a unique theatre performance. The forgotten figure of Elizabeth O’Farrell – the nurse who delivered the rebels’ surrender to the British – is also given a voice. Signatories comprises the artistic responses of Emma Donoghue, Thomas Kilroy, Hugo Hamilton, Frank McGuinness, Rachel Fehily, Éilís Ní Dhuibhne, Marina Carr and Joseph O’Connor to the seven signatories and Nurse O’Farrell. They portray the emotional struggle in this ground-breaking theatrical and literary commemoration of Ireland’s turbulent past. A performance introduction on the staging of the play is given by director Patrick Mason, and an introduction by Lucy Collins, School of English, Drama and Film, UCD, sets the historical context of the play. 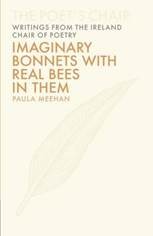 Imaginary Bonnets with Real Bees in Them

‘Paula Meehan … is a poet of solidarity – solidarity with the dispossessed, with mother earth, with her sisters and brothers in the craft’ – The Irish Times

Imaginary Bonnets with Real Bees in Them is the third volume in UCD Press’s The Poet’s Chair series, publishing the public lectures of the Ireland Professors of Poetry. The Ireland Chair of Poetry was established in 1998 following the award of the Nobel Prize of Literature to Seamus Heaney and is supported by Queen’s University Belfast, Trinity College Dublin, University College Dublin, the Arts Council of Northern Ireland and the Arts Council/An Chomhairle Ealaion. Michael Longley’s and Harry Clifton’s lectures were published in 2015. Paula Meehan’s volume of The Poet’s Chair meditates on poetry and mythology, geology and the environment, teachers and the lyric, bees and bears, genetics, memory, personal history, and much else. In three wide-ranging lectures she charts a contemporary poet’s relationship with community (emblematised by bees), family (emblematised by bears), and selfhood (emblematised by water). Upon her appointment as the Ireland Professor of Poetry, Meehan was praised as a poet of solidarity, whose work upheld the dignity of the human spirit and skilfully blended a shared and personal history. Now at the end of her tenure, this illuminating volume of her writings as Chair gives a remarkable insight into the creative processes of a poet who has contributed so much to the craft of Irish poetry.

The previous two volumes of The Poet’s Chair series, One Wide Expanse by Michael Longley and Ireland and Its Elsewheres by Harry Clifton, are also available at a 20% discount

Women Writing War examines the ways in which women’s writing in and about Ireland conceptualises conflict in the period 1880–1922. The volume focusses on literary and cultural explorations, revealing as it does so the work of a range of women who were active cultural producers and agents, deeply invested in the political and military struggles of their day. From the Land Wars to the Boer Wars, from the First World War to the Easter Rising, the War of Independence and the Civil War the women considered in this volume grapple with the experiential representation of conflicts. By engaging with recent theoretical expansion of the relationships between women and conflict, the authors of Women Writing War explore the ways in which conflict narratives have been read – and interpreted – as deeply gendered.

No area of Irish-language literary and cultural activity has received less attention than has the theatre. In An Underground Theatre, Philip O’Leary addresses this imbalance and shows that there has been a vital tradition of theatre in Irish, a tradition that has produced plays of lasting merit and interest. The book explores the careers and works of the most important Irish-language playwrights during the crucial 1930–80 period and also provides a background on the history and development of theatre in Irish.